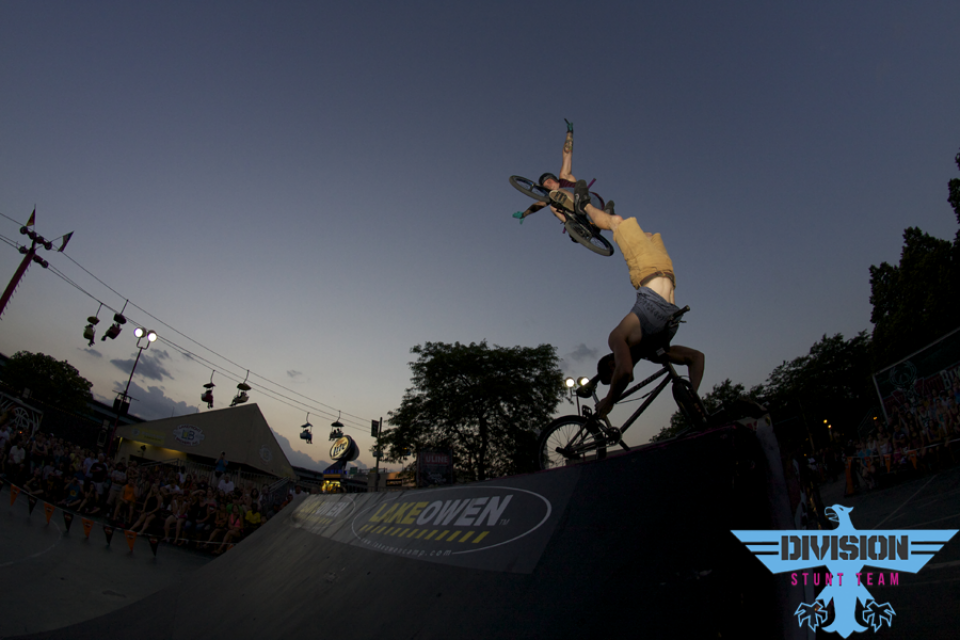 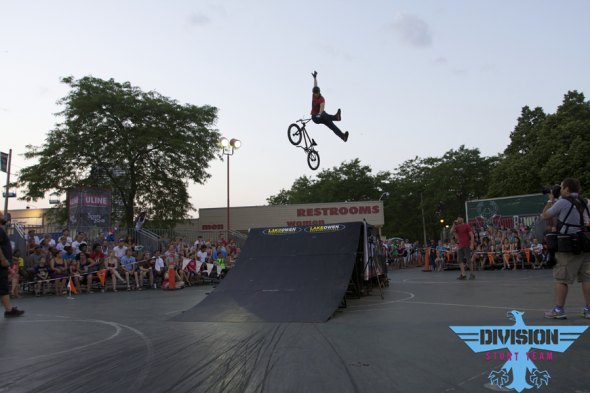 Another fantastic year of Summerfest shows have went down and to say the least, these were some of the best shows to date. The cast of characters, the late nights, the hundreds upon hundreds of people, and most importantly, all of this was done in the name of BMX. Over the next few days we are going to be putting up around 30 photos from the mayhem that is Summerfest. If you were to come to just one show a year, these are the performances. Danny Holbus is a professional racer of things with large motors, he also MURDERS it on his BMX bike. Rumor has it he has been doing this kind of stretched tricks since he was a kid. I believe it! 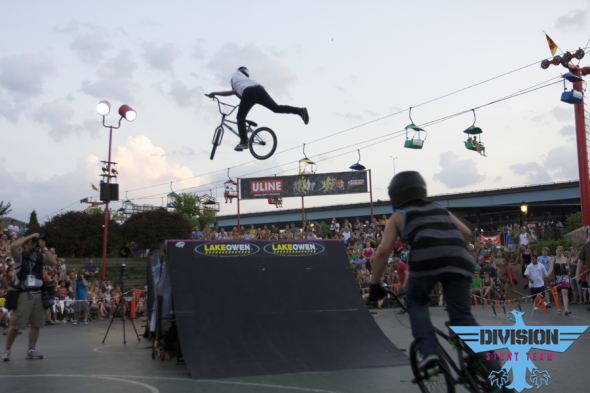 Brandon Schill has progressed to astronomical heights in the last year. He brought loads of new tricks and left inspired to learn more after the shows. His tricks are always proper and appreciated by the older riding crowd. Throw in the fact that his dad is one of the coolest humans around and you have a pretty well sculpted human. Can’t wait to see what the future holds for this one! 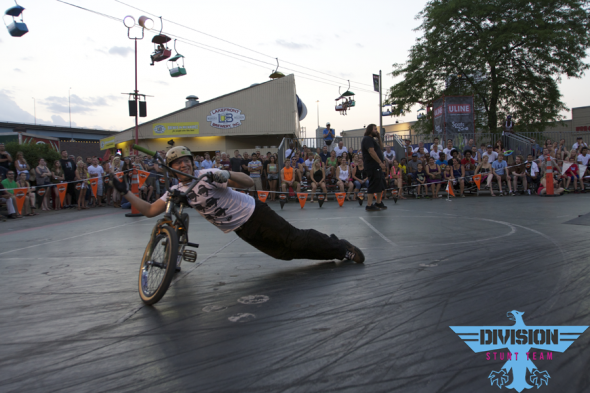 Koji Kraft is in his 8th year of Summerfest shows and this is about how serious he takes himself. For a man that rides 14′ tall ramps, he sure likes to do weird old flatland tricks. The smile on his face says it all. Thanks for all the good years Koji! 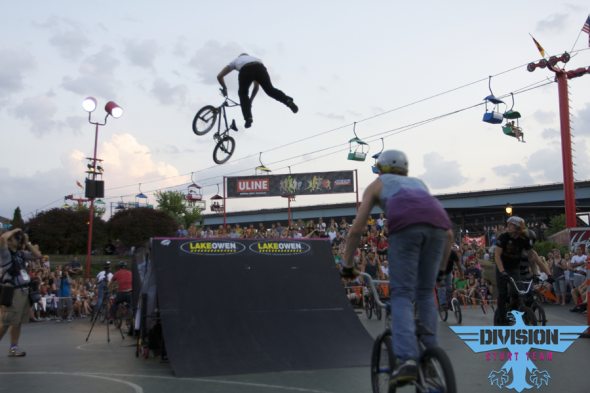 Oh he still rides too! 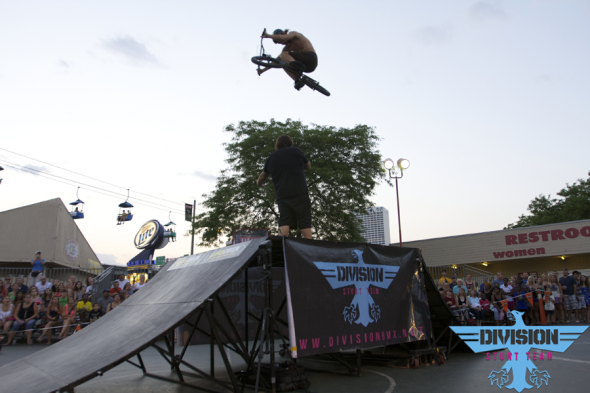 What you might not see in this picture of Little Jon is the bear/announcer that is lurking in the trees below. Cult bicycles Little Jon getting stylish over Micah. 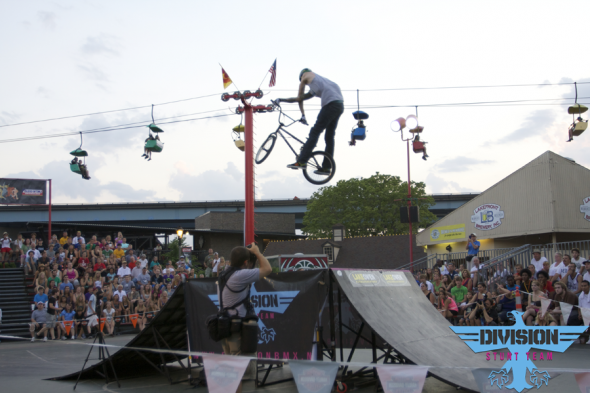 Jason Minor is such a good example of what hard work and dedication can do for someone. Here is a proper one footed X up with his son hopefully watching daddy shred his bicycle! 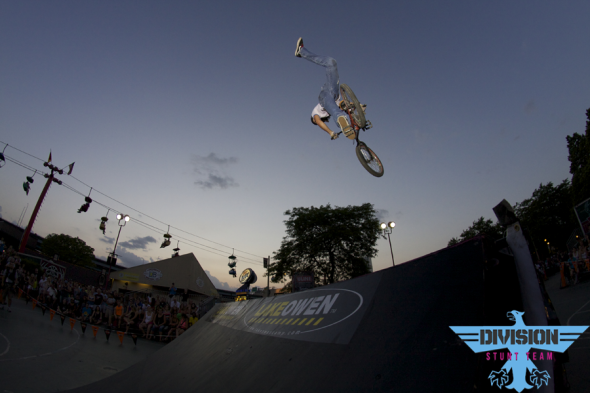 This would be a wild Nac nac if it was straight, throw it in a 360 and you have a man that is comfortable with himself and his tricklist. Jj Flairty doesn’t flinch on tricks. Everything is stretched, committed, and impressive. 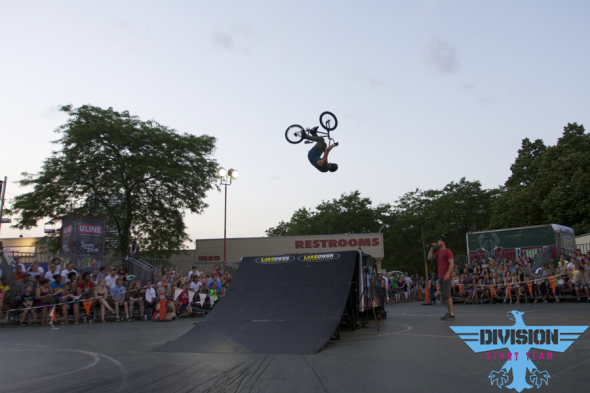 Every year a few Woodward riders come and throw down at arguably the best shows in the business. Here Lonnie Parton is as sideways upside down as possible. What a brave man on a purple bike. Announcer Chris A-stryke is somehow not at a loss for words. Impressive on both ends. 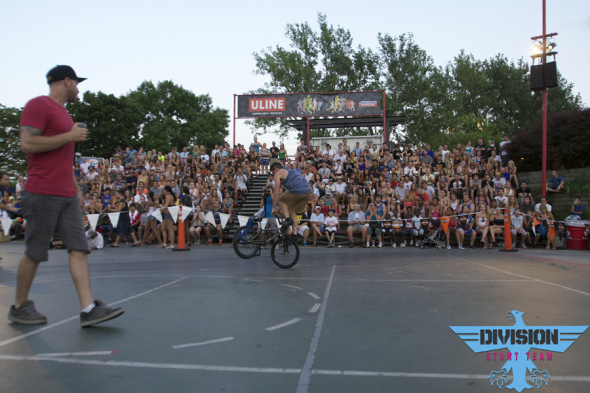 A huge amount of weight goes on the shoulders of Tim Knoll, figuratively and literally speaking. Return audience members continuously ask if Tim is coming to show off his unique bicycle riding abilities. Somehow every year he is able to add something new to his performance and basically take the show to a whole new level. He amazed the people of Summerfest and left Jaws on the floor. People don’t blink when he is riding in front of them. 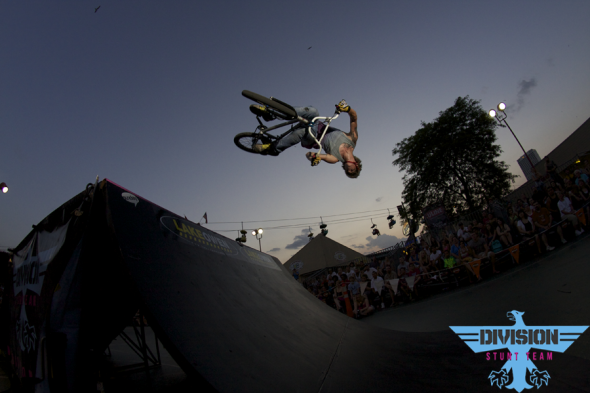 In only his second year of Summerfest Jake Hinke made his presence felt in what was probably the most amount of riders ever used for a single show in the 40 years of BMX stunt shows. Strangely it makes for one amazing show to both ride in and watch. People saw progressive BMX and every single trick that could be done over an 8ft. box jump. Here is a flair on the lip at dusk. That should be a band name. 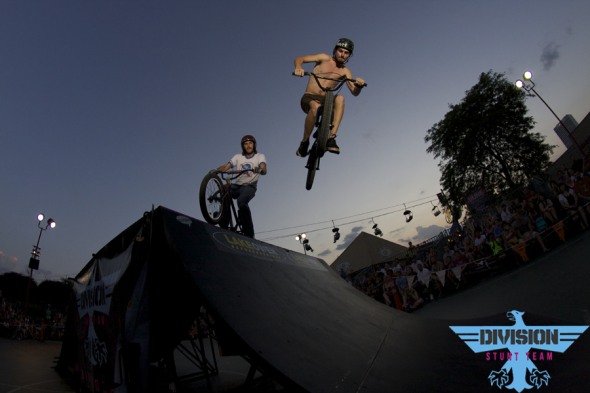 And we will end round 1 of picture time with doubles of Jj and Little Jon. The shirtless one is spinning a 360 to fakie while Jj Casually manuels with the same chain wallet from Summerfest year 1. We cannot thank Summerfest and all of the riders enough for doing their part in making these shows special! Hope to see you next year!